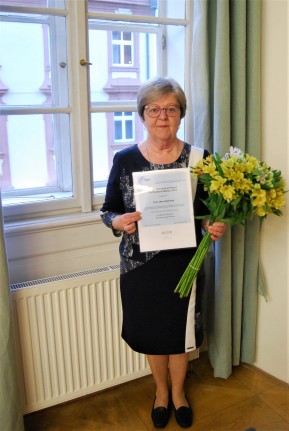 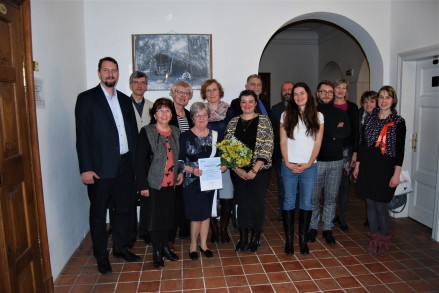 Jitka Radimská, a full professor at the Institute of Romance Languages and Literatures of the Faculty of Arts, University of South Bohemia, Czech Republic, has devoted her long and successful professional career to promoting and developing Romance studies not only in her home region of South Bohemia but also at other partner universities both in the Czech Republic and abroad.

She started her professional life as a grammar school teacher of Czech and French in the town of Český Krumlov. After twenty years of experience in French language teaching (1971-1991), she became a recognized authority and continued her numerous activities in the academic sphere. She co-founded and for more than fifteen years directed the Institute of Romance Languages and Literatures at the University of South Bohemia. She was also actively involved in founding a bilingual French-Czech grammar school in Tábor, the Czech association Gallica for university teachers of the French language, literature and methodology and she established the South-Bohemian branch of the Czech Modern Language Association (Kruh moderních filologů). In 1993, she was awarded with the Order of Academic Palms (Chevalier de l´ordre des Palmes académiques), a French national order bestowed to distinguished academics and figures in the world of culture and education. In 2009 she was appointed as a professor in the theory and history of literature and decided to devote herself fully to her research and to supporting and mentoring new Ph.D. candidates and young researchers.

Professor Radimská has published a great number of articles and monographies including propaedeutical texts for university students and secondary school teachers (e.g. Anthology of French Literature or Lire et commenter). She founded two scientific journals (Écho des etudes romanes and Lingua viva), two editorial series of monographies (Acta Philologica Universitatis Bohemiae Meridionalis and Bibliotheca viva) and an internationally recognized compendium series (Opera romanica) which became important publication platforms in foreign language philology. What she personally values above academic publications is an original, playful and beautifully illustrated French language textbook for preschool children, Ma planète, which is still in use and shows that even languages which are considered to be difficult can be learnt by little children easily through games and fun activities.

Professor Radimská is appreciated for all her professional contributions to Czech Romance studies but also for her ability to support young researchers and to motivate and inspire all her colleagues and students to follow their own path.

FIPLV exists for the worldwide support, development and promotion of languages through professional associations. We are active in over 100 countries and cover several hundred thousand teachers of languages worldwide.
View all posts by fiplv →
This entry was posted in Uncategorized. Bookmark the permalink.