This is to let you know that Linguacuisine is now available for free download from the Android Google Play and Apple App stores.

The free Linguacuisine web app helps you learn a language while you’re cooking a meal. Choose a foreign language and a delicious recipe from that country. Then your own smartphone or tablet will speak to you in the foreign language and talk you through all of the stages of cooking the recipe in your own kitchen. If you can’t understand, just press a button to get a photo or video explaining what to do. When you’ve finished, eat the food you’ve cooked and learn something about the culture of the country. Linguacuisine has a range of recipes now available for language learning from around the world at https://linguacuisine.com/app/

You can also use the free recipe builder app on the website so that you can upload your own favourite recipe in your own language. That means that anyone anywhere in the world will be able to watch videos and listen to audios of you guiding them through cooking your recipe and learning your language! Use your own smartphone or tablet to make recordings of yourself and upload them using our user-friendly software to create your own recipe.

You can also join our worldwide online community so you can rate and discuss other people’s recipes and post information, stories and photos. They can do the same for your recipe, so it’s a good way to make friends in other countries.

So Linguacuisine is a really fun way to learn about foreign languages, cultures and cuisines and you get to eat what you produce. You can also tell other people around the world about your own cooking, language and way of life. You learn foreign words better when you are physically touching food and cooking utensils and using them to prepare food. When you are cooking, you involve all of your senses in the learning experience – touch, smell and taste as well as hearing and seeing. So this is multi-modal and multi-sensory language learning. This is task-based language learning with a real product at the end of it and is intended to improve international understanding and communication.

Linguacuisine is available now for all devices, smartphones, tablets and computers from our website, where the online community is also located https://linguacuisine.com/

The Linguacuisine app is the end result of a 10-year collaboration between computing scientists and linguists at Newcastle University. The Linguacuisine project is a collaboration between Newcastle University, Action Foundation (UK), Hellenic Open University (Greece), Università degli Studi di Modena e Reggio Emilia (Italy) and the Workers’ Educational Association (UK). It is funded by an Erasmus+ KA2 Strategic Partnership grant of €324K.

The Linguacuisine app can be used for foreign language lessons, but also for cookery lessons and cross-curriculum projects. Students can use the app to cook and learn in the kitchen at home as well as at school.

The app is a good way of preparing students for a foreign trip as it helps engage them with the cuisine, culture and language in advance. Students can also write their own recipes in their own language, informing people abroad about their culture and cuisine.

It is also an excellent way of getting learners to communicate with learners in other countries. Video links have been available for some time, but Linguacuisine means that learners in different countries can do enjoyable shared activities together, cooking recipes from the other countries whilst learning about the other language and culture.

Digital skills can also be developed by using the ‘recipe builder’ authoring software. This was co-authored with learners and designed to develop a wide range of digital skills using the DIGCOMP 2.1 framework; it has been shown to be successful in improving learner competence.

For Professionals working with Migrants, Refugees and Asylum Seekers

The Linguacuisine app was co-designed with a group of migrants, refugees and asylum seekers from Action Foundation, Newcastle, UK and seeks to help them in two ways. Firstly, immigrants to a country can cook the recipes to learn about the language, cuisine and culture of their host country and help their integration. Secondly, immigrants can produce their own recipes in their own language using the recipe builder software, so they are able to have a voice and so people in their host country are able to learn something about their life prior to arrival here. A number of recipes currently on Linguacuisine have been produced by migrants in the UK.

Chefs and other catering staff who are travelling to work abroad can introduce themselves to the language, culture and cuisine of their destination country by using the Linguacuisine app. They can also increase their repertoire and employability by trying recipes from around the world and improving relevant language skills.

Chefs can also produce their own recipes in their own language or English using the recipe builder software. Their recipes can then be tried out by users anywhere in the world. Users can post feedback about the recipes and rate the recipes, so chefs can gain an international reputation and increase their own job opportunities.

Try out the app, cook a recipe and learn a new language!

This tool, produced in the ECML LACS project which was coordinated by FIPLV, provides searchable guidelines and examples, which repackage ECML resources and case studies from a wide range of ECML projects. Users will…

PARALLEL BOOKS is a new, high quality and free app for people learning, practicing or perfecting a second language.

The app displays two translations of a book or text, and keeps the translations in sync as you read. You can read a book in your new language and have a parallel copy in your mother tongue handy for reference. Tap a paragraph to show the translation, or display the two versions in full beside each other.

Although Parallel Books has only been out a few weeks, and number of schools are already using it in their classrooms. The developer is currently on a mission to add as many books as possible that are used for language teaching in high schools around the world.

Parallel Books is FREE. Currently all books are FREE.

Please download and share this on your Facebook/Twitter/blog/students. The more people that use this app, the better it will be for everyone!

ENDANGERED LANGUAGES is an interactive e-learning module on the Internet developed for the last three years of secondary schools, developed by Cecilia Ode from the University of Amsterdam (former FIPLV Editor of Publications) and is part of the NWO Endangered Language Research Programme. The module comes in a Dutch and an English version.

The module consists of two lessons, which can be used in an interdisciplinary way. Rich in colourful films and sounds, the resource is a wonderful way of engaging learners in these crucial issues.

There is also a one-hour documentary film, Voices from the Tundra, available for purchase from c.ode@uva.nl. This is a highly personal and moving film based on Cecilia’s work in Siberia. Shown at the FIPLV/CASLT/OMLTA World Congress of Modern Languages in Niagara Falls, Canada, the film drew strong praise from viewers. It is highly recommended!

For further information and leaflets, as well as a link to the module, please see Cecilia’s website: http://www.endangeredlanguages.nl

Please share this widely as it needs to be seen.

QualiRom: new databank of teaching and learning materials for Romani 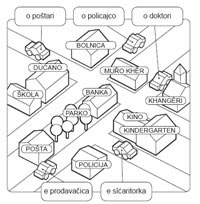 The “Quality education in Romani for Europe” (QualiRom) initiative has published an extensive databank of teaching and learning materials for teachers of Romani (http://qualirom.uni-graz.at). The materials developed in six Romani varieties range from proficiency levels A1 to B2 for learners at primary, secondary and tertiary levels and constitute the largest resource of its kind for the teaching and learning of the Romani language based on European standards. The databank comprises 39 sets of materials (some 16 000 pages!) in Arlije, East Slovak, Finnish, Gurbet, Lovara and Kalderaš.

The materials use a task-based approach and can be adapted to the specific needs of particular educational contexts. To ensure their effectiveness in the classroom the materials have been developed and piloted in close cooperation with local Romani teachers as well as national educational authorities in five countries: Austria, the Czech Republic, Finland, Slovakia and Serbia. During this process children who used the materials developed learning skills – such as the ability to make decisions when working in pairs or groups and to evaluate their own learning – that may not have been encouraged within their mainstream education.

The QualiRom initiative focusing on raising literacy levels in Romani was carried out under the European Commission’s Key Actions 2 programme. In training teachers of Romani the 3-year project made extensive use of the Curriculum Framework for Romani (CFR) and two European Language Portfolio models developed by the Council of Europe’s Language Policy Unit in co-operation with the European Roma and Travellers’ Forum.

The ECML together with the other project partners and the project coordinators, the Plurilingualism Research Unit, Karl-Franzens University (Graz, Austria), will examine possible follow-up measures to further promote the use of this impressive resource both in teacher development programmes and directly with learners in countries with Roma populations.

The newsletter is full of news about French topics and the French language. Find here for example the newsletter from 26/03-2013.

TV5 has a special site for the French language that you can find here.